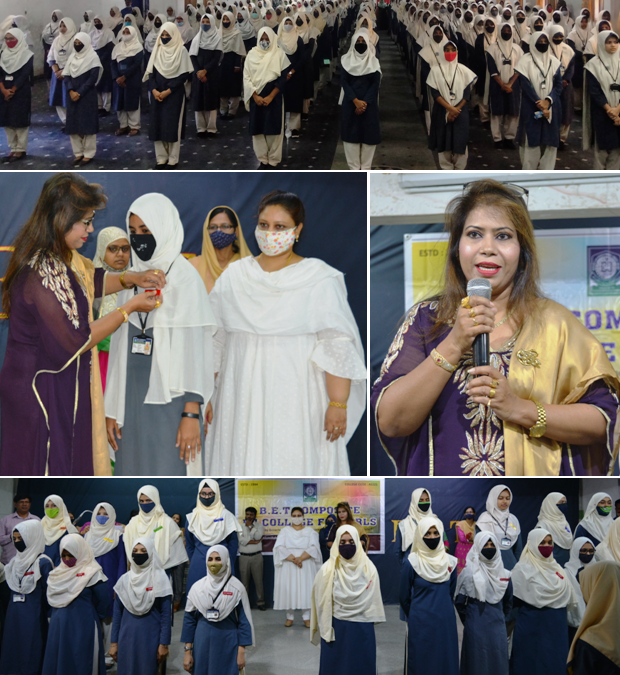 Investiture Ceremony for the academic year 2020-2021 was organized in the college campus for the students of PU for the post of secretary 1 and 2, Joint Secretary and Class Representatives respectively. The chief guest for the event was Mrs. Seema Kouser, Social Activist, feminist speaker and a political activist. The guest of honour for the day was Mr. Tehran from Tehran Builders. The welcome for this event was presided by Mrs. Sayera Uzma, lecturer, Dept. of Physics. The students were conferred with badges for the role of secretary 1 and 2, joint secretary and class representatives respectively. Farhath Parveen and Nazia Kouser from II PCMB, Nida Fathima and Farheen Khanum from  II CEBA Mehraj Fathima and Saniya Tarannum from II HEBA, Ruksar Sheikh and Arshiya Taj from II HEPS were elected as secretary 1 and 2 respectively. First PU students were elected as Joint Secretary 1 and 2 simultaneously.

The class representatives from both the sections were elected and were also conferred with badges at the same time.

A word of motivation and determination was shared with the students, to inspire them for the enhancement and the growth of females in different fields. The vote of thanks was delivered by Mrs. Roopa S, Dept. of Political Science. Later the event was winded up with a National Anthem.